Tapping into a world of imagination: Hansel & Gretel at the Place

Entering the rehearsal room for Hansel & Gretel at the Place is like walking on to the end of a rainbow. Primary colours and laughter fill the room. Vicki Igbokwe, the show’s choreographer, greets me with a hug – she “doesn’t do handshakes”. The atmosphere is as warm and bright as the set, which the dancers are currently getting accustomed to jumping on, over and around.

As the performers refine their movements and rehearse their steps, Vicki sits down with us to chat. She is an extraordinarily passionate woman. After years in street dance, she fell in love with house dance, particularly the dance styles waacking and vogueing, which led her to take a research trip to New York City. “I went to an underground club, and I was basically baptised on the dance floor. I had my back up against the wall for what felt like two, three hours. People were coming up to me and trying to get me to dance, and I kept saying this cringey line: ‘No, no, no, I’m from London!’” But in the end, the line stopped working: Vicki was guided into the cypher – where dancers form a circle and, one after another, enter into the middle and dance. “In the end, I was one of the last people left dancing. Because it made me feel like Janet Jackson! I knew then that was my artistic voice.”

This discovery then prompted Vicki to form her own dance company, Uchenna Dance. Now, Vicki is reimagining Hansel and Gretel for the Place’s Christmas show, incorporating waacking and voguing-influenced styles. During a run-through, the dance is packed with energy, getting you grooving in your seat. At one point, I’m even brought out my seat by one of the dancers, who leads me into the performance space and takes me through some of the movements. It’s at once like nothing I’ve ever seen before, and utterly recognisable as one of the nation’s favourite stories: of children who are lost, and then find their way. 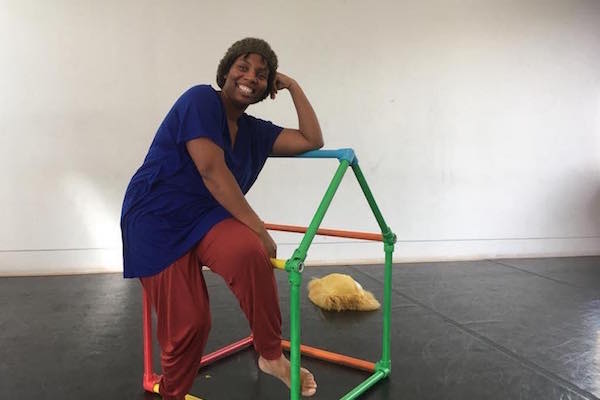 Vicki with the set.

Vicki chose Hansel and Gretel after a quick informal poll of her friends on their favourite fairy tales, and having read the story many times herself as a child. Knowing immediately she didn’t want to do a traditional fairy tale, but something that brought the story into the modern day, and one that celebrates the child characters. “My focus is celebration of Hansel and Gretel. These kids get left in the woods, but they’re resilient, they stay together. So that’s the thing I’m pushing for the kids in the audience to really see.” Having written a script with Gbolahan Obisesan, the script was then translated, as it were, into dance and movement, although some storytelling aspects remain, as Vicki is clear that one of her goals for the show is getting a wide range of people into the audience: “some people might see brilliant movement and dance but then get lost in the story, so I’m keeping particular text-based scenes in it.”

Vicki’s modern story sees Hansel and Gretel leaving a faraway home to come to London, encountering adults both friendly and hostile along the way, a story which will remind parents and older members of the audience of many news stories of the past few years. Vicki wants to be sure, however, that the show is still joyous, and not moralising. “We finished the script last year and then almost immediately the stuff in America started happening. People asked me if I was going to address it and I just said no. This is for kids, it’s Christmas. It has those themes but it’s not going to become a front-running piece of political work,” says Vicki. “I think we see messages more when we’re not being told off. When we can have a bit of a laugh, we can be joyous, and then we can receive the message more. And who wants to be crying at Christmastime?”

An interview with Vicki at the Place.

The set is particularly interesting, almost a physical representation of the joy inherent in the dance: colourful, playground-reminiscent structures which serve to represent many different objects and locations throughout the story. “We have an underlying theme of superheroes in the show. Even as an adult you have this alter ego you have to tap into, and that superpower for kids, often, is using their imagination. So I was thought it would be great if it was movable, and we could transform the space, tapping into that world of kids’ imagination.”

“I want to make work that empowers people, entertains people, educates them, and you can also have a laugh,” Vicki concludes. By the smiles on everyone’s faces, we think she’s succeeded.